The project that will swap campsites for condos was adopted by District of Squamish council.
Jul 22, 2021 6:26 AM By: Steven Chua 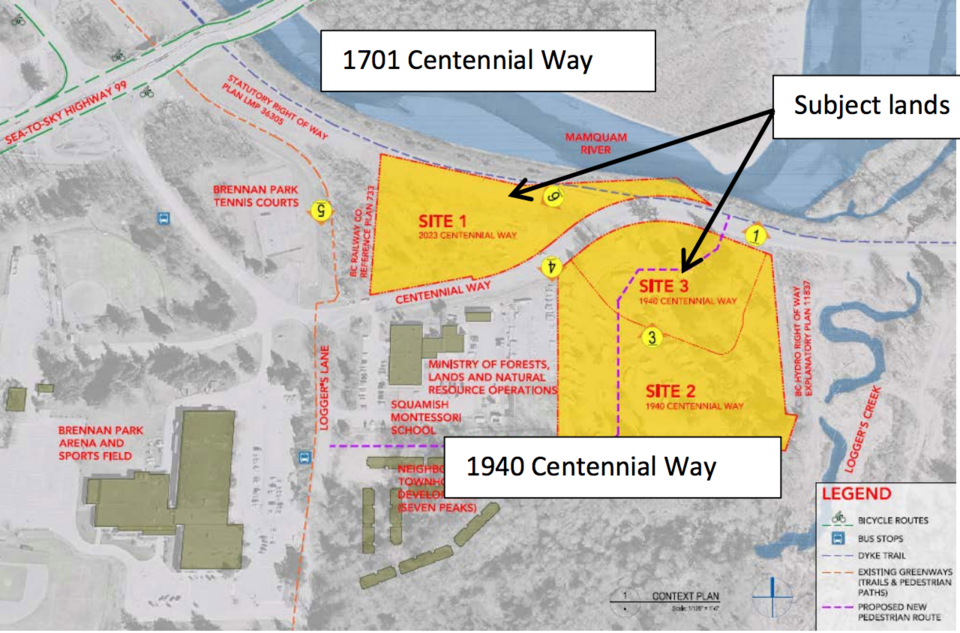 The project, slated for 1701 and 1940 Centennial Way, received third reading last year, which kicked off the lengthy process of having the proponent fulfill several conditions required for adoption.District of Squamish

A project that will remake the Loggers Lane-Centennial Way area from a campground to a residential development has passed the final zoning hurdle.

On July 20, council voted unanimously in favour of adopting a rezoning application for the Anthem Properties’ Loggers Lane development at the former Eagle Vista RV Resort and Campground.

The project, slated for 1701 and 1940 Centennial Way, received third reading last year, which kicked off the lengthy process of having the proponent fulfill several conditions required for adoption.

A fundamental condition was executing the terms of a land development agreement, which was intended to secure the applicant’s proposed community amenity contributions, affordable and market housing, infrastructure improvements and a daycare space, among other things.

The development is expected to bring dozens of condos and several townhouses to the area, as well as commercial, office and light industrial space.

Construction of the development is scheduled in three phases, during which community benefits will be doled out according to the following timeline.

The first phase will be the build-out south of Centennial Way, which will include 22 affordable rental apartments, 58 market rental apartments, and light industrial and office space. There will also be a childcare facility for up to 25 children.

“The childcare facility is purpose-built,” said planner Aja Philp. “They need to find a childcare provider to lease the space to but potentially not at market rate due to the clauses we put in the land development agreement.”

Jonas Velaniskis, the director of planning, said the daycare space must be filled by a childcare operator, or it will be turned over to the District for a nominal lease fee — perhaps $1.

The District could then find its own operator if the proponent fails to do so, he said.

Mayor Karen Elliott said this could allow the District to pick a non-profit daycare.

“If [the developer] fail[s] to get a provider, we could take over this space and then we could turn around and sublease it to a not-for-profit childcare provider for a dollar,” Elliott said.

The second phase would include cash community contributions, a signalled pedestrian crossing at Centennial Way, a dike pavilion, a bus stop, public art, public paths, and a playground. At this point, commercial, retail and more office space will be built.

The third and final phase will include one affordable townhouse rental unit, landscaped paths and the reconstruction of the Loggers Lane intersection, among other things.

For greener emissions standards, townhouses built in the second and third phases will be entirely electrified, and no gas fireplaces or cooking will be provided.

Coun. Jenna Stoner wondered why the requirements for electrification are not also required for the first phase, when many apartments are expected to be built.

“This development has been in review for a couple years now,” said Velaniskis.

“It actually was one of the first developments to commit a portion of the development to meeting the low-carbon energy standards, so we’ve kind of ramped it up over time.

“But we’re also recognizing that we’ve negotiated those conditions a while ago, kind of before our standards have evolved. So the proponents agreed to bring in the townhouses, which really is more, I think, the meaningful impact.”

About $1.25 million in cash will also be given in lieu of creating more amenities. That money is expected to go to a general fund that will pay for neighbourhood improvements throughout town.

City of North Van approves rental building with no resident parking
Jul 13, 2021 8:05 AM