Advocates say yes, landlords are divided and the government says it is not currently a priority.
Apr 13, 2021 12:45 PM By: Jennifer Thuncher 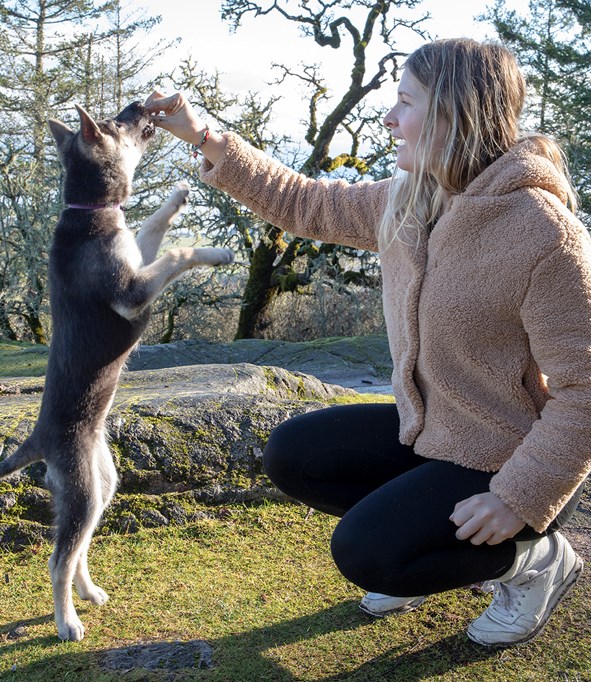 Lots of folks in Squamish want to get a pet, like this three-month-old shepherd/husky cross. Ascent/PKS Media Inc/.Getty Images

If you browse any of the online Squamish rental forums, it quickly becomes apparent that many who want to live here are searching for a pet-friendly home.

But many of the posts for available units state they don’t allow pets.

“All across B.C., people are struggling to find pet-friendly housing. Basically, half of Canadians have pets, and we have a system here in B.C. that is quite far behind, for example, Ontario,” said Jordan Reichert, with OK Pets BC, a group that lobbies the government for pet-friendly housing.

Though they can screen tenants for pets, once moved in, landlords in Ontario can’t restrict tenants from having pets.

They also cannot ask for a pet security deposit.

Under the B.C. Residential Tenancy Act, landlords can ban pets entirely, or set limits on the number, size, or type of pets a tenant can have in their rental.

In B.C., landlords can also ask for a pet damage deposit of up to half the monthly rent and potentially deduct from it for damages.

“There is definitely a heavy burden upon tenants,” Reichert said.

In tight rental markets, renters then have to make tough choices, he added, noting that 10% of available rentals typically accept pets.

“Do I find safe, affordable housing, or do I have to give up a beloved family member. That is not a decision that anybody should have to make.”

“Basically, if pets weren’t problematic, everyone would want to rent to people with pets. There are obvious reasons why they don’t,” a Squamish landlord told The Chief.

The landlord had valid concerns around possible repercussions from speaking out, so we agreed not to identify them.

“As the owner, it is my right to decide if I want to rent to someone with pets or not. I have many friends, and family members with pets, and all readily admit that pets can be very hard on your home. They are often replacing items that have been ruined by a pet. No question that there is more wear and tear with a pet than without. So why ruin my own investment?”

“Bottom line: once renters start dictating what an owner can and cannot do with the property they worked hard to purchase and maintain, we are in dangerous territory,” the landlord said.

He said in Ontario, there is a system of tenants and landlords coming together through mediation to find an equitable solution to any issue, including damage by pets.

“We talked to landlords in Ontario, and they were perfectly happy; in fact, they couldn’t believe that in B.C., landlords were allowed to restrict against pets,” he said.

“What we want is for the ministry of housing to change the residential tenancy act to make it so that landlords cannot discriminate against tenants with pets, basically make it so that the clause in rental contracts would be null and void.”

Reichert said under the previous Liberal provincial government there was no movement toward a pet-friendly policy.

When the NDP was elected, the group was more hopeful, but a more pet-friendly policy hasn’t materialized to date.

For a decade, Gordon Adams has been the property manager of Edgewater Place and eight apartments in Valleycliffe. All told, he is in charge of 85 units.

He noted that most of the units have laminate flooring rather than carpet.

“It is very easy for animals to live in there without damaging anything. They are more than welcome here.”

He has two dogs himself. His rule for new tenants is he has to meet the pets before they move in.

And he’s flexible with the number of pets allowed.

“The most that we would allow anybody to have would be three,” he said.

He said if, for example, an elderly widow has to choose between a pet and housing, it isn’t fair.

“It is just devastating for them,” he said, noting that the owners of the buildings he manages are understanding.

He said there have been issues with owners not picking up after their pets outside the building, but that has been mostly solved with landscaping.

“We got rid of the grass and put in artificial turf for the dogs. It makes it very easy to clean up after them.”

Dog bags are available on-site next to a trash can.

“We try to make it as easy as possible for our tenants to comply with the rules,” Adams said.

Once, when he had a meet and greet with a new tenant and pet, the dog was very aggressive, so Adams put the tenant on the ground floor where the owner and dog could come and go without meeting other tenants.

Adams thinks the tide is changing and more landlords are seeing that pets are part of families.

“When we travelled across Canada, we had hotels all across Canada that accepted our dogs with no problem at all.... So landlords aren’t going to be able to resist it for that much longer.”

In an email to The Chief, a spokesperson for the Ministry of Attorney General said that all renters deserve to find homes that are the right fit for their families.

Over the last few years, the Ministry has been making amendments to strengthen the Residential Tenancy Act by acting on the Rental Housing Task Force’s (RHTF) recommendations, the spokesperson said.

“The RHTF conducted provincewide engagement with renters, landlords, and stakeholders on how to improve security and fairness for renters and landlords in B.C. The RHTF examined the topic of pets during their consultation and did not recommend making a change.”

The report from the task force reads: “While Task Force members heard the desires of pet owners to require rental housing providers to allow pets as a way to increase the supply of pet-friendly housing, members also heard from many renters and rental housing providers who did not support this legal change. Concerns were raised about allergies, damage, and disturbances to other renters. Some housing providers indicated that they would rather remove homes from the rental market than be forced to allow people with pets to rent their properties."

The spokesperson noted that the government is working on increasing housing overall, which should ease the shortage of pet-friendly places as well.

“We are making the largest investment in housing in B.C.’s history, committing almost $7 billion dollars over 10 years, and working with partners to create 114,000 affordable homes – including rental homes.”

Reichert said if pet-friendly rental housing is an issue that matters to Squamish folks, talk to Sea to Sky MLA Jordan Sturdy.

“Let them know that this is an issue that you care about; that it is affecting their constituents and their community, and they are the ones that should be taking this to the minister of housing, taking this to the attorney general and saying, ‘The housing crisis is already at its peak, we need to alleviate whatever concerns we can, and this seems like really quite a small change we can make that will have a significant impact on those just trying to find safe, affordable housing in B.C.'”