Profiles of Excellence: Save on Foods

Grocery stores have been faced with unprecedented challenges in 2020 as the world navigates the realities of the COVID-19 pandemic. Squamish’s Save-On-Foods was in good form to meet those extraordinary challenges head on this year. 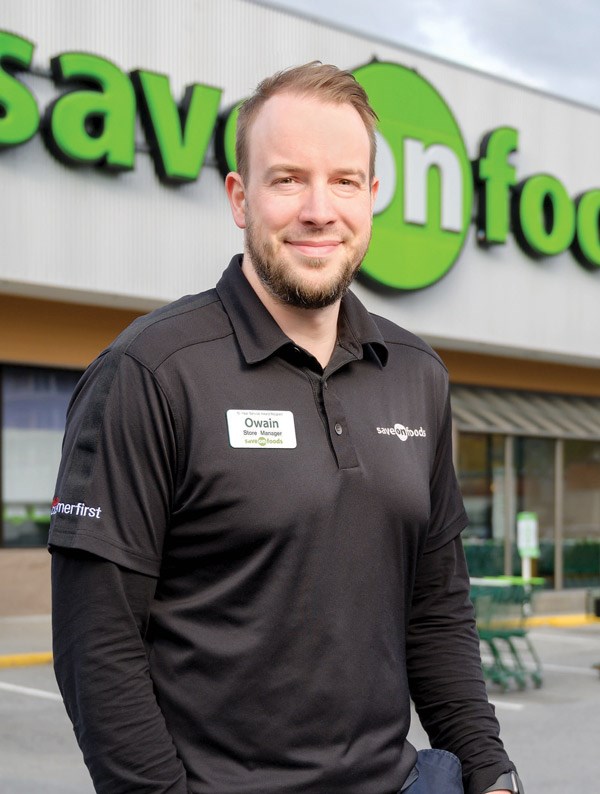 Owain Hoefle, Store Manager at Save on Foods in Squamish.supplied

Grocery stores have been faced with unprecedented challenges in 2020 as the world navigates the realities of the COVID-19 pandemic.

Squamish’s Save-On-Foods was in good form to meet those extraordinary challenges head on this year. That wasn’t always the case.

Store manager Owain Hoefle recalls taking the reins in Squamish in 2018. The store was chronically short-staffed; some employees were scheduled seven days a week; turnover was high and morale was low.

“When your hiring is a challenge, everything falls apart from there,” says Owain.

He quickly realized he needed a plan.

Owain proposed a project that would see an increase of the minimum wage of more than $2/hour. The wage increase was married with a refer-a-friend incentive program—up to a $300 in-house gift card for bringing in someone who was a good fit in the store.

Within six weeks he had hired 60 new employees at the new starting wage. The new pay scale also meant a bump in wages for about 45 long-term employees.

“I’m a firm believer in paying people what they’re worth,” says Owain. “It was a no-brainer for me.”

The bump in minimum wage fixed the ongoing staffing woes: job burnout became a thing of the past, the rapid staff turnover disappeared and amazingly, average wage costs went down with less overtime and less turnover.

It wasn’t all smooth sailing, Owain admits. A roster of inexperienced staff meant lots of training and manoeuvring to see where people fit best.

“It wasn’t an absolute slam-dunk easy thing to do.”

The hard work, however, paid off; Save-On-Foods was finally on track after years of struggle.

Though Owain had solved his staffing problem, nothing could have prepared him for what was to come in March 2020 as the world coped with a deadly pandemic and grocery stores became an essential service.

“My team didn’t skip a beat,” he says proudly.

Keeping up logistically was the biggest challenge—getting the product to the store and filling the empty shelves and then enforcing the new rules of social distancing with directional aisles, plexi-glass shields and limiting the number of customers in the store at a time, among other things.

Reflecting on the changes, Owain says the company’s mission statement of always putting the customer first had to evolve as they coped with challenges.

It has helped that the community of Squamish has been behind the Save-On-Foods team, with understanding and grace. In turn, Owain has been putting the local community first, ensuring Squamish residents get priority for online grocery shopping over other customers as online orders come in from as far away as Chilliwack with people looking for certain products.

“We’re keeping the online ordering quite small just so we can service Squamish the best we can, otherwise it’s just going to fill up with city orders,” he says.

After two years in Squamish, Owain has been promoted to a Save-On-Foods store in North Vancouver.

His biggest takeaway from his time in Squamish is this: “Any problem can have a solution, you just have to figure it out. (Staffing) was a problem for a lot of years in this store. I’m super proud that we were able to accomplish what we accomplished.”