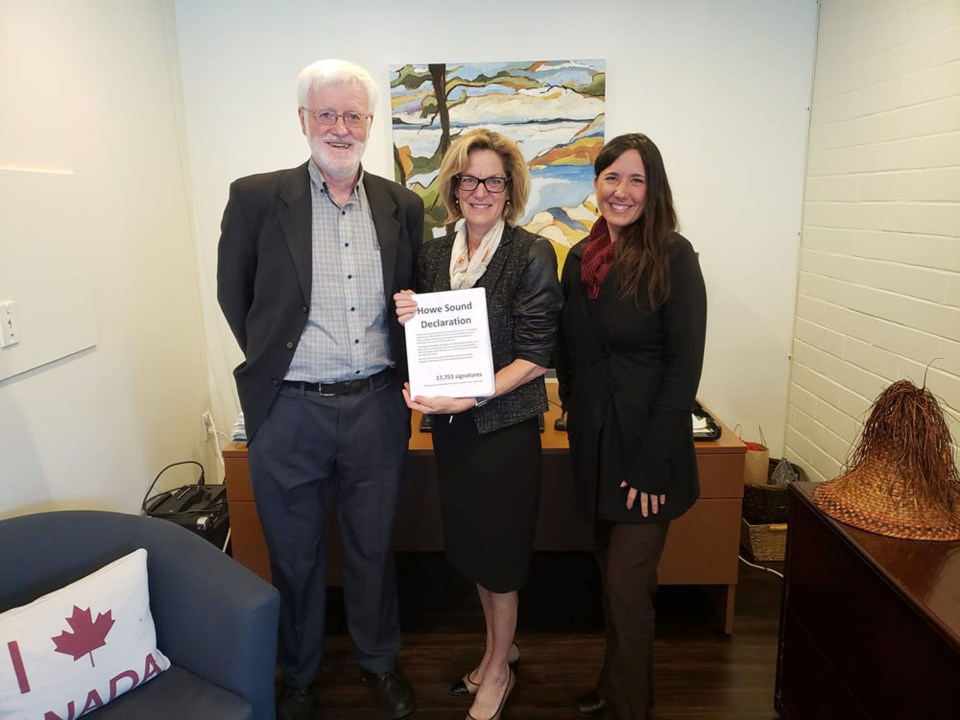 My Sea to Sky delivers their petition to protect Howe Sound to MP Pamela Goldsmith-Jones on April 15.Submitted

A petition that has been years in the making has nearly reached 18,000 signatures.

On April 15, for the third time, My Sea to Sky delivered a petition to save Howe Sound and stop Woodfibre LNG in Squamish.

"For me, climate change is one of the biggest issues that we face," Tracey Saxby, a co-founder of My Sea to Sky, said. "[LNG] is still a fossil fuel industry. They keep on selling LNG as if it's this clean and green energy, and it is not. It is one of the most energy-intensive fossil fuels that exists. To claim that it is going to help solve our climate challenge is, quite frankly, false."

The concern the group has laid out in the petition centres around shipping, storage and Howe Sound, which Saxby said is recovering.

"The fact that the herring has come back, the anchovies are coming back, the seals and sea lions and the orcas and the whales are coming back after decades of industrial destruction," Saxby said. "That's due in great part to the massive efforts of so many different organizations and of the government to clean up the toxic industrial legacy of past industry. We're seeing Howe Sound come back to life as a result. That is simply amazing. All of that is at risk again if we allow Woodfibre LNG to go ahead."

After receiving the petition on April 15, Member of Parliament Pamela Goldsmith-Jones said she will take the signatures to Marc Garneau, the Minister of Transport.

The number of signatures, Goldsmith-Jones said, "underscores the passion of members of the community, driven by their love of Howe Sound. I think we all agree on that. This particular group, My Sea to Sky, has been assiduous in focusing on Woodfibre LNG. A lot of that attention has improved the project. As well, it's helped Squamish and Squamish's approach to how to develop a community that has industry and that is a complete community."

Goldsmith-Jones added that while the Woodfibre LNG project is small, she will remain focused on the safety of shipment and the health of the ecosystem.

"My personal view is that this is not the optimum location for an LNG facility," Goldsmith-Jones said. "However, I feel that certainly the province of British Columbia and Canada as a whole are looking seriously at developing LNG."

In an email, the president of Woodfibre LNG, David Keane, responded to the petition.

"Woodfibre is proud to be one of the cleanest LNG projects on the planet. Following three lengthy and rigorous assessments, we were granted environmental approvals from the Canadian government, the B.C. government and the Squamish Nation. Our work in collaboration with the Squamish Nation resulted in a decision to electrify the facility, the first LNG project in B.C. to make that commitment," he wrote, adding that the project will help remove greenhouse gas emissions equal to 400,000 cars annually.

"We welcome every opportunity to share our project's significant global and local benefits with members of the community, and urge anyone with concerns to reach out."