99 North is back in business in a new location at Squamish Station mall a little over a year after being forced to close
Nov 26, 2020 6:32 AM By: Steven Chua 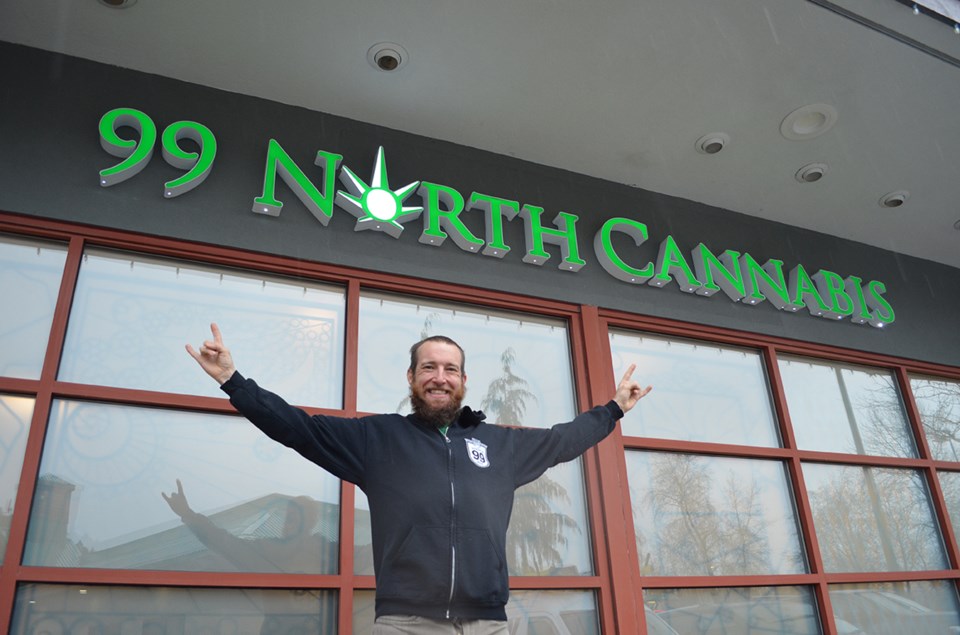 After facing the possibility of being permanently shuttered, Squamish’s first cannabis dispensary is making a comeback.

Provincial authorities closed down the store that was then located on Second Avenue and seized its property last year, but 99 North Cannabis Store is reopening its doors in a new location.

“My face hurts from grinning, and I am shaking with nervous excitement as I type this,” wrote owner Bryan Raiser in an email to The Chief.

“99 North Cannabis, the community’s cannabis store — is back and open for business.”

The Liquor and Cannabis Regulation Branch website shows that the dispensary has obtained a licence, making it Squamish’s second legal shop.

On Sept. 30, 2019, Sky High Cannabis opened its doors as the first provincially-approved dispensary in town.

On Nov. 25, 99 North opened its doors at 103-1200 Hunter Place, Squamish Station, which is right beside Bosley’s by Pet Valu in the Nesters Mall.

It’s been a long time coming.

Raiser’s journey started back in February 2015, when he first opened the doors of 99 North.

The former District councillor was able to win the blessing of the municipality to operate his dispensary.

When legalization was on the horizon, Raiser was quick to get his application in to provincial officials.

“Heck, we made history by being the first application in the province to have municipal approval — further proof of this town’s next level awesomeness,” he told The Chief on Monday, as he prepared to open up his new shop.

However, when legalization officially occurred in October 2018, Raiser didn’t hear back from the province, despite having submitted his application to Victoria in September 2018.

Well over a year past legalization, permission had still not been granted by the province’s Liquor and Cannabis Regulation Branch.

Then, on Nov. 5, 2019, officers from the Community Safety Unit shut down the store and seized his product.

The CSU was seen taking boxes of material out of the dispensary.

At the time, Raiser said in an interview that officers told him he was operating an illegal shop.

Raiser said that it was unlikely he’d be able to reopen his shop.

“At this point, my only plan is to cry,” he told The Chief after the seizure. “I would love to open again...The dream is dead.”

However, one year later, it appears as if the dream has been revived.

“There are no words to express the excitement of this historic time and I am overjoyed that you could be part of it from day one,” Raiser said.

He added he’s had much time to think about his next steps over the past year.

“We are seeing the evolution of a community project that has many days ahead with a new location, new regulations, but the same goal,” he wrote.

“We look forward to making sure when you spend a dollar in our store it stays in the community. Our focus right now is to contribute profits to community dental care, First Nations initiatives and trail building. That way when 99 North Cannabis succeeds, the community succeeds.”

Raiser expressed gratitude to the community for the support it’s given him.

He also said that once the pandemic is over, there will be a formal grand opening.

As of now, there’s enough space in the store to physically distance, he said, and COVID-19 safety precautions are in place.

“I once again cannot thank the community enough for all the love and support I have received and continue to receive,” Raiser wrote.

“As a known hugger/ambassador of stoke it is going to kill me to not be able to offer hugs to each and every person who comes in the door, but when we are post-pandemic you better believe there will be the grandest of openings for 99 North, the community’s cannabis store.”