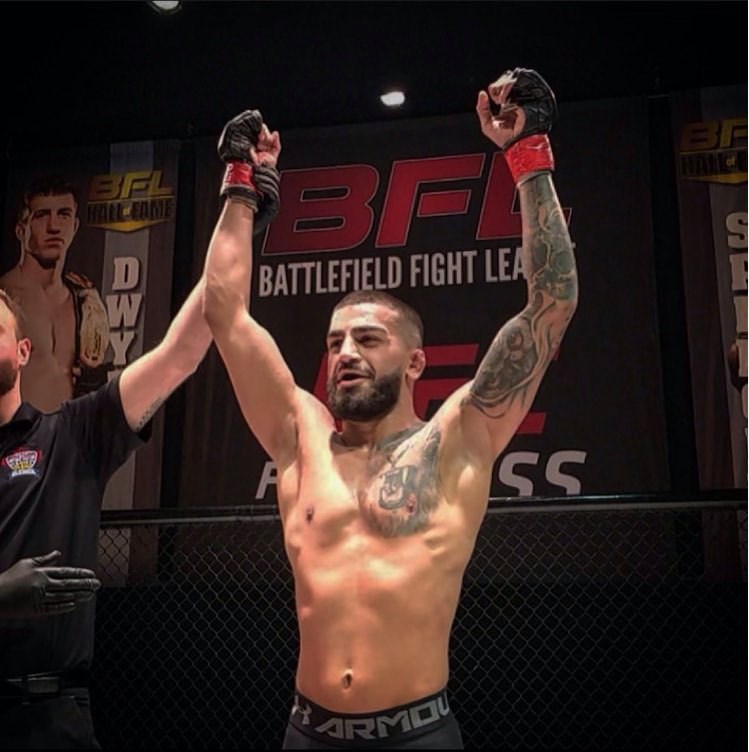 Squamish's Indroop Virk has won his first professional MMA fight, which also happened to be streamed on the UFC's online channel.BFL

Squamish's Indroop Virk has won his first professional MMA fight, which also happened to be streamed on the UFC's online channel.

On March 19, Virk defeated Matt Dawson, a Chatham, Ontario, native who entered with a record of 2-0.

He won via unanimous decision in the flyweight match at Battlefield Fight League 66.

Virk told The Chief he was pleased to take on a fairly tough opponent.

"It was great getting my first pro win. You get such a high-ranked guy. This guy was ranked Number 7 in Canada in the flyweight division. He was 2-0 as a pro," he said.

"It felt good beating someone like that as my first pro fight."

In addition to being his first professional win, Virk was also fighting for the first time in front of an international audience.

Battlefield Fight League 66 was BFL's debut on the UFC Fight Pass streaming service. The organization signed a deal to have the service broadcast its fights starting this year.

Virk said as he was getting ready to step into the cage, he felt unusually calm.

Instead of a roaring stadium, COVID-19 restrictions dictated that he'd be fighting at an empty theatre on Granville Island. The audience was entirely online.

That may have also helped keep the nerves cool, he said.

As he was walking down into the cage, Virk said he could feel Dawson's eyes on him.

It's a familiar ritual for fighters to try staring each other down as they size each other up for the fight.

However, Virk said it didn't phase him.

When the first round started, Dawson opened up with an overhand left, clipping Virk.

"It dazed me like for a second, not enough to knock me out or anything," he said.

Virk retaliated with a kick to the head and a straight punch.

He then took his opponent down to the ground seconds later.

"I just beat him up the rest of the round. Got his back. Finished some elbows."

The rest of the fight, by Virk's account, followed a similar pattern.

The Squamish fighter would open up with some strikes, and then quickly take his opponent down to the ground.

During the final round, that pattern proved to sway the judges firmly in Virk's favour.

"I just shoot in on his legs again up against the wall," he said. "Take him down and just elbow his head in over and over again."

For the next step, Virk said that he's keen on fighting again as soon as possible.

He said his ultimate goal is to get the BFL flyweight title by the end of this year.

Squamish kiters looking for a realignment solution for the Spit
Mar 12, 2021 4:41 PM